american idol top 11: you're watching the show with me 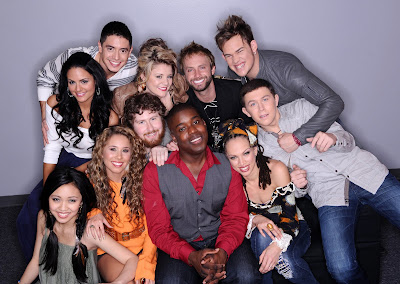 I didn't get to watch American Idol on time tonight, so instead of bugging you all with a million tweets, I figured I'd share all of my thoughts as I watch right here. PLUS! I can add all the performances in in case you missed it.

This season is amazing and if you haven't been watching, you're not smart. Get with it.

Now on with the show.
Tonight's show was pretty incredible. Never have we been at the top 11 and I haven't known, with confidence, who I want gone. I'll be sad to see anyone go, really! BUT. If I have to pick one to go, it's definitely Thia. I don't think America will agree, but I hope they do. Joining her in the bottom three should be [unfortunately] Casey, Paul, or Haley.
Wow. Tomorrow night's show is going to be intense, I think.
Let me know your thoughts! I like hearing them as much as I do sharing!
love,
elizabethany
Tweet
Posted by elizabethany at 11:56 PM

Email ThisBlogThis!Share to TwitterShare to FacebookShare to Pinterest
Labels: american idol, because you want to know, elizabethany, motown, top 11, tv