Tweet When I think of Fonzworth Bentley, I can't help but think of him holding umbrellas for Diddy.. or Puff Daddy, I guess. [I actually wanted to take a pic with him and an umbrella, but I didn't know if that'd be rude.] 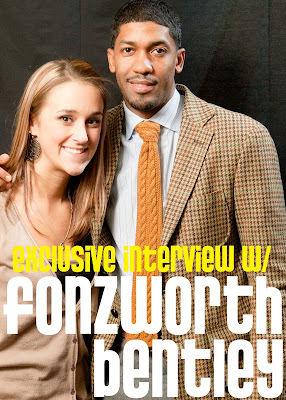 BUT.. He's so much more than that! As you probably saw on "G's to Gents," he's the king of swagger and a super-gentleman. Now he's written a book about it and how to succeed in life, and is releasing an album this spring!

He's an amazing story of growth, success, and making dreams come true through hard work and being good to people, and I was really pretty honored to meet him. And not only MEET him, but have him come in studio for an interview.

Unfortunately we were short on time and late in the day, so it wasn't as extensive as I'd hoped, but he joined Niblett and I to talk about swagger, how to be cool like him, his book and album, and Niblett's fashion.
Plus: His tips for beginners trying to become a little fashionable and clean cut.


Podcasted version of the interview plus more pictures can be found here!

He was a truly respectful, well-spoken, smooth, super nice, funny, and most definitely swaggerific man. [That's a lot of good talk, there!] You never know if someone is how they perceive themselves, but he is, and it was very refreshing.

Also: Niblett had him sign some autographs for us in studio! If you'd like Fonzworth Bentley's autograph, laminated and everything, RT this interview and I'll pick someone by the end of the week!

Posted by elizabethany at 1:22 PM