Tweet If you watch the Bachelorette or the Bachelor Pad, you know who this guy is. With the looks that he's got, it's hard not to.

He's using his 15 minutes of fame to release a book all about how a lady can grab the attention, reel in, hang on to, and deal with the "Man Code man." AKA- the ultimate guy that every girl dreams of, but apparently lost touch with. [Meaning we've gotten all caught up in the glitz n glamour of the guys on the ridiculous reality shows.]

I haven't read many books in my life, but I really did read this one before the interview! It's got a LOT of really good points and quotes in it such as my favorite:

"Everyone thinks the world owes them happiness. Ironically, the world is now full of spoiled pussyfooters with no hustle. Instead of working hard to make happiness a reality, they put in just a bunch of half-assed work and quit when it doesn't work out."

He really speaks the truth throughout the whole book, and that's why I recommend it. I also recommend listening to his super-honest podcasts with me!

We talked about how the stupid people used to be killed off back in the day, but now the smart people are saving them, and what a Man Code man really is:

We also talked about this season of the Bachelor, who he's rooting for, and why he went on the Bachelorette. [He thought he was going to be fighting for Melissa!]

And finally I had to ask him about one of the hottest lists I've talked about- Everyday things that girls do that turn a man on. Does he agree with them?!

Now if only he had told me where exactly I can find a steaming hott Man Code man like himself, this woulda gone perfectly.......

ANYWAY!, he's going to become a regular on my show! Any time we talk relationships, we'll be talking to Dave to get his Man Code opinion on it!

Ladies- if that doesn't excite you, maybe you should check out some of his pictures. Then I think it will.

I can't wait to talk to him more and seriously- check out the book. Girls and guys alike could use it. [Check out two pages/graphics from the book below!] 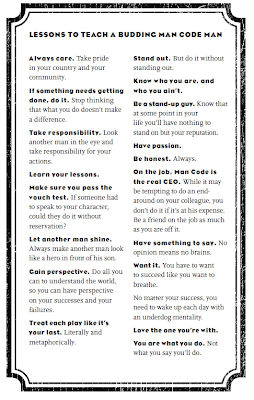 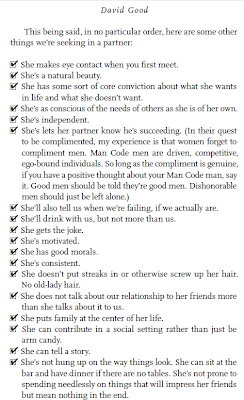 Posted by elizabethany at 4:41 PM