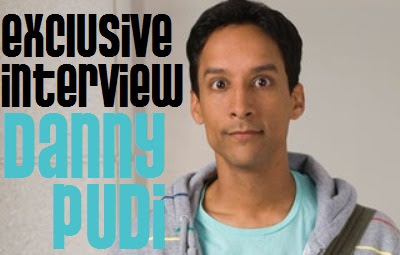 Tweet You probably know by now [thanks to tweets and my interview with Gillian Jacobs] that "Community" is one of my favorite shows.

Apparently it's not doing so well in the ratings thanks to its competition, but the show is damn good and has really been pushing the creative limits this season.

One of the cast members who seems to be pushing it the most is Abed... AKA Danny Pudi.

With their stop motion/Christmas episode airing tonight, I got the chance to interview the most hilarious character on TV right now [in my opinion].

"I'm much more natural animated... It was another dream come true."

We talked about everything from how he got teased growing up to how stop motion animation works, which completely surprised me! I totally had it backwards. And yes, of course I asked him about his scenes with Donald Glover/"Troy."

"Donald Glover is one of the funniest and smartest people I've ever met and worked with so it's comforting to work with him because I know we'll figure something out."

I was a little surprised at first because I always prepare myself for these interviews as if I'm interviewing their character. Danny's Chicago accent and very down-to-Earth, talkative nature really left me with a much different interview than I imagined in my head, but sometimes we all have to remember- they are in fact real people beyond the show!

Make sure to check out tonight's sure-to-be-awesome episode at 8/7c!

Posted by elizabethany at 4:39 PM