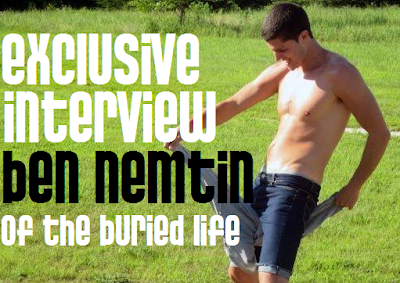 Tweet Tonight is the finale of Season 2 of "The Buried Life" on MTV, which I think has been one of the shows to bring MTV's programming back up to greatness.

If you haven't seen it, four guys have made a bucket list of things to do before they die and are completing the most bizarre things without any help from MTV.

I was REALLY excited to talk to Ben, who seems to be the head of this whole "project," and ask him about everything from how it all started, what's been the biggest or most surprising accomplishment, and how he can help me with my list.

"When we do the show, we make sure we don't ask any favors of them because for us, we wanna prove that regular people can do these things, and we want to be like you and your friends going out and what would you do? That keeps the show grounded."

Tonight's episode features #75: Make a million dollars. I don't know that the usual person could do that overnight the way they did, but it sure would be interesting to try.

He was a really cool guy [mostly because of how he said he'd help me with my list] so I advise you to listen to the entire thing, duh.

YES!!!! I've FINALLY found my Sugar Daddy! And maybe now all of these repetitive dreams of meeting Britney Spears will come true.

Thank you, Ben... for officially becoming my hero and money supply. I'll send my address right away.

Posted by elizabethany at 5:25 PM