I may be new to this town, and I may have been in DC when they gave me this challenge, but with the help of all of you and your suggestions, I found a group of guys that I can believe in!!

I introduce to you- Flawless Escape. 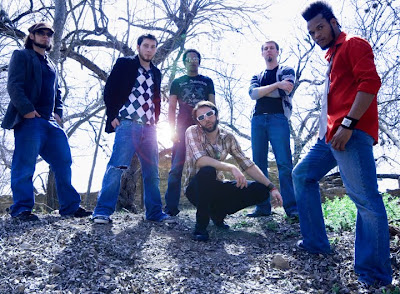 We have a LOT of really awesome things set up for this week, but before I tell you exactly what they are, you gotta check out this video of them performing live while on tour with Flyleaf. LOVE this song!

I first checked out their music on MySpace and was impressed, but I gotta be honest... Just like everyone told me beforehand, they're even better live! I went to their practice today and I was diggin' it! They really get into it, and they were only in their bedroom!

Because I can't fully like an artist or a band until I approve of their personalities, here's a quick video of them introducing themselves today:

YES! You read right at the end! We have all of those things coming up!

They will be joining me LIVE on my show on Candy95 tomorrow starting at 11am CDT. We also had KBTX join us during their practice! That story will be aired throughout the day! Tomorrow afternoon: Let's just say we'll be walking the streets of College Station in an... interesting... way.

Wednesday, the big day wrapping up this challenge, we have arranged a LIVE SHOW! It will be held at the Stafford in Downtown Bryan, but for those of you who aren't local: We'll be streaming the show LIVE online!

You may not have heard of these guys before today, but you're going to get to know them real well in the next two days! Get pumped!

Tomorrow I'll also have some more video from today! [Which may or may not include a Cribs-style tour of their van, Mario Kart racing, and a flip-off.... along with some music, of course.]

The guys joined me on my show today!! Here are some of the breaks we recorded talking about the show tomorrow and their picks for 90s Dance Party!

Posted by elizabethany at 1:18 AM