I'm definitely sick of hearing about how Kanye interrupted Taylor's speech. Okay, it was stupid. He's a huge d-bag. Tell me something I don't know. The guy's been on my hate-list since day 1.

What I do find hilarious are A) the people who are talking about it and B) pictures people are making/things they're having him "say."

Did you hear Obama called him a jackass?! Yea, President Obama got caught saying Kanye West is a jackass, and it's just one reason why I love our president.

I wonder if Kanye will come out and say "President Obama does not like Kanye West"... Oh wait. Obama already did that for him.

What happened to you as a child?? Did you not get hugged enough?? Something must have happened to make you this way and I think we’re all just curious as to what would make a grown man go on national television and make a talented artist, let alone teenager, feel like shit. I mean, I’ve seen you do some pretty shitty things, but you just keep amazing me with your tactless, asshole ways. It’s absolutely fascinating how much I don’t like you. I like everyone. I even like my asshole ex that cheated on me over you…which is pretty odd since I don’t even personally know you. The best part of this evening is that you weren’t even up for THIS award and yet you still have a problem with the outcome. Is winning a moon man that much of a life goal?? You can have mine if it will shut you up. Is it that important, really??

I was actually nominated in the same category that Taylor won and I was excited for her…so why can’t you be?? I’m not even mad at you for being an asshole…I just pity you because you’re a sad human being.

On a side note, Beyonce has always been a class act and proved again tonight that she still is. Go TEXAS!!

Taylor Swift, you outsell him ….that’s why he’s bitter. You know I love your work! Keep it up girl!

But... the funniest part of everything are the parodies and images people are creating. "Kanye West interrupts..... Everyone." 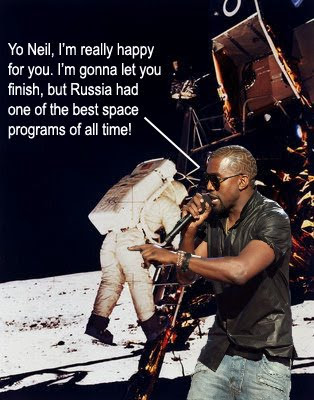 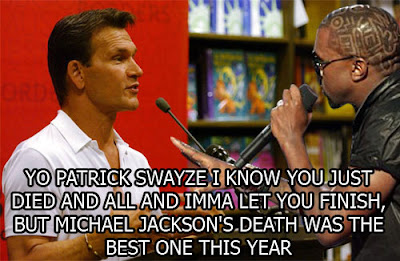 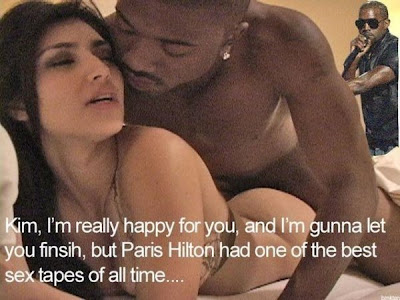 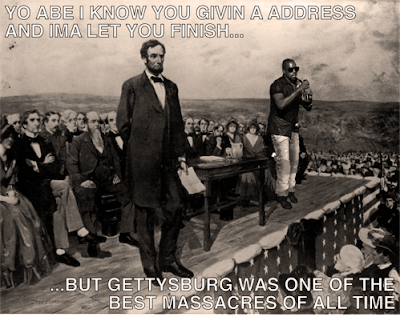 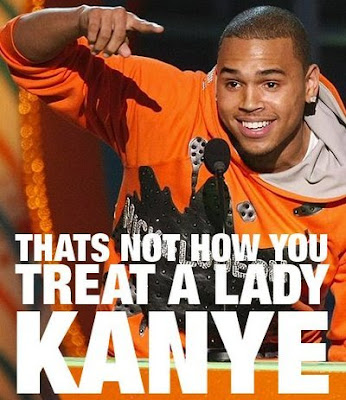 And finally... Even Hitler hates Kanye. Now that's an accomplishment.

Seriously, dude... I've told you before, I will totally say it again. Go jump off a cliff or something. Go to the top of Mount Everest and roll the entire way down. Run your car off a bridge. Keep the Summer of Death going. Please. For me? I just think you're a waste of life.
love,
elizabethany
Posted by elizabethany at 12:20 AM

I think Kanye was completely wrong and I strongly dislike him, but man..to wish death upon him?? A little too much there girl.