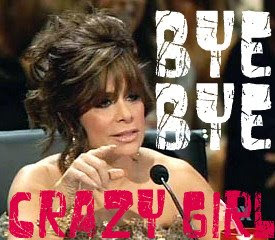 As of now, it's looking like Paula Abdul may really be leaving the judges' table on Idol.

Apparently she's super sad and mad and emotional because she's not getting a new, better contract like Mr. Seacrest did. [45 million dollars for 3 years. Not too shabby....] She feels betrayed and is saying she doesn't want to get back on the show this season.

Honestly... Paula is a major part of the entertainment of the show. She's absolutely nutso. She's crazy. Unpredictable. Pair her with Simon, things get even more ridiculous. I'm not saying her leaving the show would make me stop watching, but it would definitely take away some of the enjoyment.

Someone please get this lady some drugs or something so that she's happy again and will stay on the show. Seriously... Do it.

Paula was the second best judge for the sole reason that she has some semblance of a personality... now the show is going to be even more dependent on Simon