I don't think I've ever really wanted to spit on someone unless they dared me and didn't think I would do it, but I want to spit on Kanye. 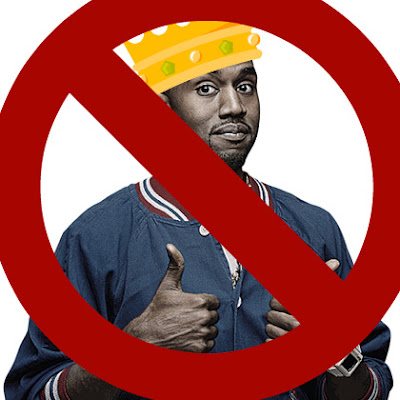 He absolutely disgusts me. I hate everything that comes out of his mouth... And yes, that includes his music.

Homeboy decided it would be a good idea to name him the new King of Pop, just one month after MJ died.

You know everyone loves and respects Michael but times change. It’s so sad to see Michael gone but it makes a path for a new King of Pop and I’m willing to take that on. There’s nobody who can match me in sales and in respect so it only makes sense for me to take over Michael’s crown and become the new King. First there was Elvis, then there was Michael, now in the 21st century its Kanye’s time to rule. I have nothing but respect for Michael but someone needs to pick up where he left off and there’s nobody better than me to do that. I am the new King of Pop.

Get out, dude! Seriously... Leave the country and the world. You are NOTHING compared to Michael Jackson.

Can you dance? Can you sing? Can you be a decent human being that cares for something other than himself? No, no and no.

Besides the fact that Justin Timberlake is the reigning Prince of Pop, and Chris Brown is the Prince of R&B or something, isn't he?! They get first dibs on the crown if it were to ever be up for grabs, HOWEVER, it won't be... Ever.

Ugh. I'm mad. If I were outside I would spit right now.

I agree Kanye is so full of himself and not even that great!

it was a hoax.
http://www.google.com/hostednews/ukpress/article/ALeqM5iaw_dHORv7ZOV5pIR1puKRPyu6mQ