So normally, I'm not a big fan of sequels.. At least not lately. But some can be redone, I think.

Anchorman is one of them... Especially when it would be about Mr. Ron Burgundy making the transition into the 1980's world of news. 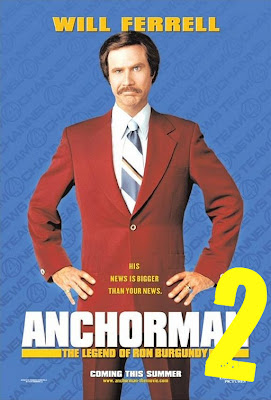 Oh wait... This isn't just a dream or idea... This is really going to happen! [Probably.]

They've been saying for about a year than Ferrell and director Adam McKay have been talking about it, and it's even on imDb.com, but Ferrell never really commented much on it... Until now.

He talked to radio hosts in Australia about how he was going to be talking to Steve Carell and Paul Rudd about it all, including salaries and ideas, next week!!

I'm even more excited about it because though I always thought it was funny, after actually working within the TV news world, i found it even funnier. I can't wait to watch a new version of it. Woohoo!

And there are SO many GREAT 80's songs that I can imagine them all singing. Oh my.. What would be the best? It's impossible to pick!

Email ThisBlogThis!Share to TwitterShare to FacebookShare to Pinterest
Labels: movies, will ferrell