*This is gonna be a long one. I'm treating it like my diary... and a way to motivate myself [and maybe others] in the future if I'm ever feeling down.*

Truth: Every year in September, I watch a ton of my coworkers and idols and big bosses head out to Vegas for our iHeartRadio Music Festival, have the time of their lives, meet each other, be merry, watch incredible performances, and post all of their pictures to accomplish what I assumed was their only goal: to make me extremely jealous. The FOMO really turned into a physical pain last year and I decided no matter what, I was going next year.

More truth: Not many people get "picked" or awarded trips out there from the company. We're amongst the peasants to find our way out there, buy tickets, etc. That's what I had to do. I bought a solo ticket, planned on dancing alone in the crowd, and hoped I'd be able to hustle my way backstage or at the very least- find a friend. No matter how many friends from home offered to come along, I knew I needed to make this about networking and didn't want the baggage.

Turns out- Being in Vegas alone is weird. Luckily, everyone's drunk and if you're out early enough, you'll find people to talk to who haven't gotten to the belligerent and creepy level yet. That's what I did on Thursday before dinner.

Anyone who has come to me [or maybe didn't ask but I gave it anyway] for career advice, I've always said networking is the biggest thing.. and not just "good to meet you," but also genuinely keeping in touch with them. Thanks to doing this, I was invited to dinner with some VIPs in iHeartMedia. Next thing I know, we're doing porrons, which looks a lot like awkwardly pouring olive oil in your mouth. 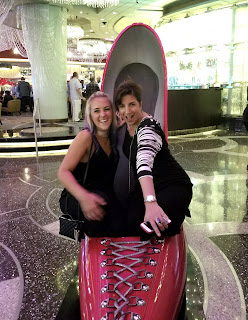 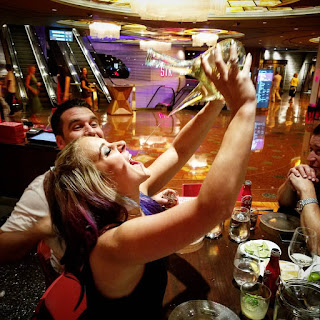 Yeah, we keep it real professional 24/7 in this biz.

From there, I got the invite to check out the club everyone talks about in Vegas, and where Tiesto has his residency- Hakkasan. Suddenly I'm sitting behind the opening DJ, sipping on drinks and looking like a kid who just got a gift they couldn't even dream of under the Christmas tree. 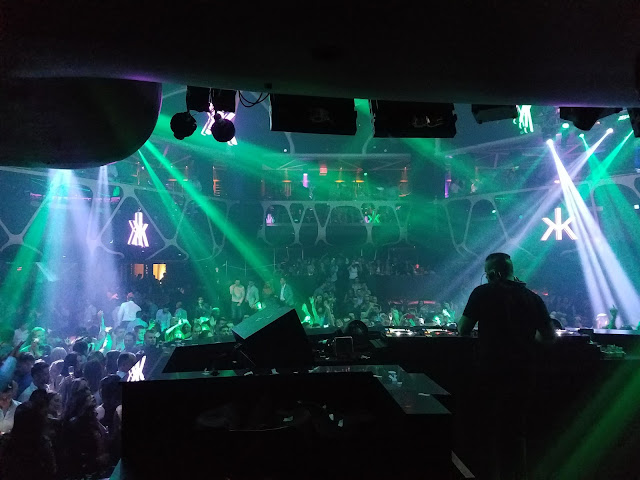 Day two was actually day one for most people, and for the festival. After a slow recovery [turns out it's possible for me to get a handicapping hangover], I head to another dinner that I luckily got invited to by simply mentioning to someone that I didn't know what was going on. They called their people who set me up with free food, drinks, chats with Martin Garrix and Tinashe, and more networking.

At one point, this convo happens:


Me: My bosses all took bets on what would get me arrested first, and it's probably gonna be a restraining order from Britney Spears.

Big wig at RCA Records: Do you like her or something?

RCA: Well, have you ever met her?

Me: *eyes start watering up* No I don't know if I could even handle that. Don't say that.

RCA: What if I could make it happen?

Me: No, really, don't tease me. *more tears* I need to mentally prepare for something like that.

He looked like he was gonna be up to something, but I couldn't count on it. It was time to head to the show, anyway.

As I'm walking there with friends in the biz, we run into the right person carrying a pocket full of passes. He says hello, asks if we wanna go backstage, and HOLY HELL I'M GOING BACKSTAGE JUST LIKE THAT.

Seriously y'all, I knew I would have to hustle hard and it COULD happen, but I really didn't think it would on night one.

Being back there was surreal. It was Jingle Ball on ecstasy. Celebs EVERYWHERE. Bosses EVERYWHERE. People I knew I had to meet EVERYWHERE. It was gametime. There was no holding back. I decided I would say hello to everyone I could, and I did. I talked to the program directors of other radio stations. I talked to other on air personalities that I've looked up to [the amount of times I told Charlamagne tha God that he's brilliant = 12, at least]. I talked to the freaking CEO of iHeartMedia like it was nothing. I just walked right up to him with my hand out, introduced myself, and thanked him for letting me be a part of a company that puts on such an incredible event.

I mention talking to these people before anyone else because it was meeting the fellow iHeart people that gave me such a high. Every time I introduced myself and they had heard my name before, I was stunned. My boss here in DC walked up and could tell I was happier than I had ever been in my entire life, and she was right. I was living in a dream that I never thought was possible.

But of course, there were the celebs. The artists, the reality stars... THE OLYMPIANS. I've gotten in trouble before for being in the way, so I made sure I was never doing that, but I seized the freaking moments and said hello/got a selfie with everyone I could.


I was hanging with Raven, another fellow night chic out of Minneapolis, and just kept telling her we had nothing to lose. We're either going to fangirl from afar over everyone, or we're gonna be their friends.. OR we're gonna fangirl to their face and have a good story to share. If we're not doing any of the above, none of this would have been worth it. It became the motto of the weekend.

I genuinely can't even explain the feeling I had beyond bliss and pride. I had a pride in myself that I'm not sure I'd ever had, and I hadn't even done any actual work! It was just a successful night of meeting everyone. Then we got to hang behind Martin Garrix, and next to Miley Cyrus + Liam Hemsworth. It was tough, but I let them live their life without bothering them... plus I was mesmerized by Garrix, the huge moving circles in the middle of the club, and the fact that Zedd showed up to show love and just stood in the corner of the booth jamming along. I LOVE mutual respect within any business; there's nothing sexier. 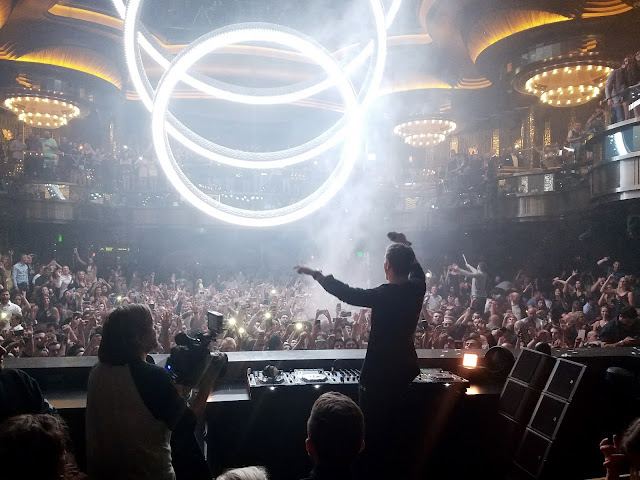 Come Saturday morning, well noon, I was still drunk and getting ready for the Daytime Village. I have a reputation to live up to: Party all the time, have fun, and do it all again. Seriously. Professional reputation that I mentioned being proud of before....

A couple dozen people were chillin and eatin and enjoying even more music when I get the text from RCA: "Be at the venue no later than 6."

Rush back, get ready, and tear up the entire way there. Then tear up in the hall. And this is not like me. I won't pretend like I don't get a little starstruck sometimes, because I do... but when I said I'd cry while meeting Britney I didn't think it would really happen.... til it did. BUT WHO CARES I MET HER. She called me baby and did this interesting "mouth pose," as my friend said. 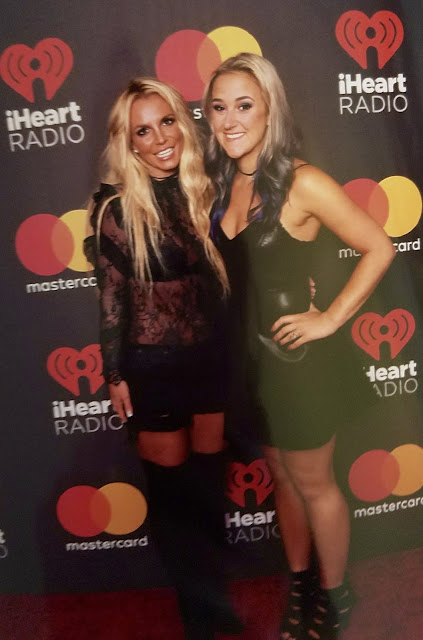 I walk out to find Jordan Fisher, who I absolutely adore, and I'm shaking and freaking out and he's just laughing at me and trying to calm me down.... until John Stamos and Taylor Lautner walk by. What do I do? I walk in front of them and yell HI!!!!!!!!!!!!!!!! *pause* Uhhh... that's it! Just wanted to say hi!!!!!! *another pause and awkward smile* John laughs, says an Uncle Jesse hi, and they walk around me.

There's Jordan again, laughing... Wishing someone had caught the moment on Snap or something. It was clearly going to be a very awkward night.

Saturday night was another night of networking [with a much more awkward touch, but I still owned it as much as I could without being medicated...] and trying to get into the super special invite-only after party. Everyone talked about it all weekend. It was my main goal and I let everyone I talked to know it.


At one point, out of nowhere, someone walks up and hands me a pass to get in. Just like that. BAM. WHAT IS HAPPENING AND HOW DID THIS ALL COME TRUE?!? I'm not trying to ask any questions out loud that other people might be wondering in their minds.

Here I am, in a Vegas club, in a booth... with a few coworkers, a few people I've idolized, and then Ryan Seacrest and Lil Jon in the booth right next to us. I feel like some of this sounds so non-chalant, and to some people it was, but I was freaking out on the inside. I'm STILL freaking out. It was almost like an out of body experience [and no- not because of Vegas' beverage of choice for once].

A week later, I've been working on this post for several days, but there's always more that I'm thinking about... and SO many thank you notes that I'm working on sending through snail mail because handwritten notes are the best notes... and again, if you're not going to keep in contact and really stay friends with these people, what was the point?! [Well, beyond a bomb ass time in Vegas and stories that'll take over an entire night if someone asks me how it went...]

Once again, I went on a trip where I was technically alone, and came out learning so much and feeling so motivated. Don't be afraid to travel alone. Well, you can be afraid, but don't let it hold you back. When you do something that scares or intimidates you and then really follow through with it, the reward is that much better.

This post should end here. I should really learn to STFU sometimes.... but also, I shouldn't. Talking got me here and it's gonna get me to wherever my future is waiting. Still, I'm done. for now. Right after I share some more pictures/views from Snapchat so you get the whole vibe in case you were also way too drunk and missed it.

"A week later, I've been working on this post for several days, but there's always more that I'm thinking about... and SO many thank you notes that I'm working on sending through snail mail because handwritten notes are the best notes..." I am amazed how many people don't think about this with situations in life. A lot of people think doing a simple social media post of few words or not doing anything at all is the "thing" to do. It isn't. Your thank you notes will probably get saved by who you mail them to and those people will remember you for future events.

I am insanely proud of you for being able to pull off this trip but also way more jealous than anything else. Congratulations on 8 years EB!

I definitely dream about going to this party place again. The live music at the event venue was an added bonus, providing a backdrop for the fun hours spent imbibing, tasting, and chatting up with the breweries and beer distributors.

Thank you for this information. This is a good idea to spend winter holidays with your family. Also I want to attend this event with my friends. I need some rest after working year at phd dissertation writing service and to get some inspiration for the next year.