Oh my God. This is really not okay.

50 Cent is apparently filming a movie right now called "Things Fall Apart" about a football player who gets Cancer [which sounds pretty good to me!].

In order to play the part, he had to lose some weight... and by some, I mean a LOT.

As a quick reminder, here's the Fitty you probably know and love: 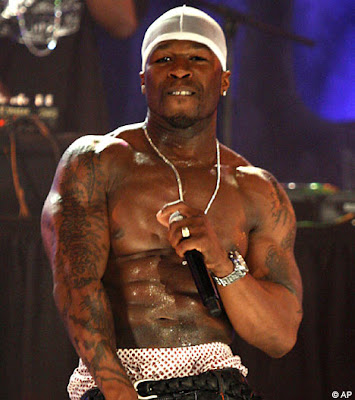 Now here's the new one: 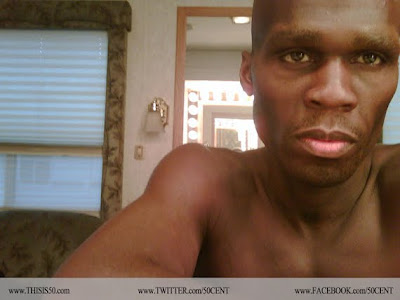 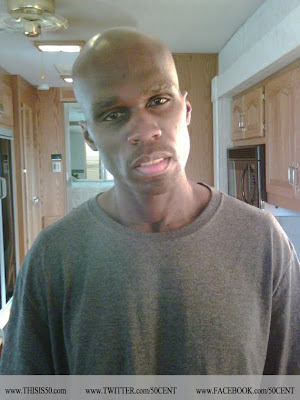 It's one of those things that's really gross to me and I don't want to look at, but I can't stop staring. He looks disgusting.

I understand it's the role he's playing but damn... That's some serious weightloss! He lost SIX INCHES around his weight, and about 50 pounds within 9 weeks.

OMG. I really can't stop freaking out about this. What if he can't get back up to his normal weight?! What if this really damages him?! I feel like it would!

Yikes. I hope I don't have nightmares tonight.

is that really him? where are his tattoos?

I agree with Lauren. Totally not him. You can't just take off tattoos.

you can see behind the picture that he has his shirt off that he is in a dressing room/probably a trailer dressing room (look at the lights). So he probably took this picture when all his tats had been covered up. Look at Angelina Jolie - tons of tats but you never see them in a movie. It is totally him - look at the eyes and nose. I hope he gets his muscles back. He looks creepy now!

He's been removing tats for a while to get more roles. http://www.theboombox.com/2009/07/15/50-cent-removes-tattoos-for-hollywood/

I'm not convinced this is him!
Seems more like a hoax, so some brightspark can use the phrase '25 Cent' and congratulate themselves on a pun well intended...

I agree with all of them, although when I think concise…I think writing with a scalpel more than writing short posts.
jumping stilts