the final real world dc chat is back on mtv.com!

It gives me mild panic attacks to actually say this, but tomorrow marks the final episode of The Real World DC. Honestly.... I can't believe it.

For the premiere, Chris and I hosted a pretty amazing party with Metromix, Callie, Ty, Emily, and Ashley. 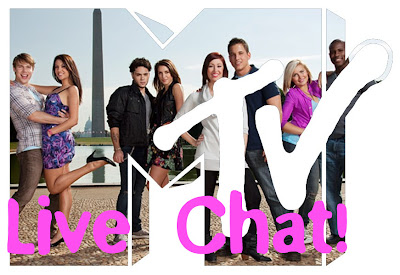 For the finale, we're making it possible for people all over the world to celebrate with us; We're doing out chat on MTV.com again!

If you joined us last time, you know how awesome it was. I think everyone, including the people from MTV, Andrew, Josh, and everyone else from the show who joined us, really enjoyed themselves! Why wouldn't we do it again?!

SO! Tomorrow night, 9:45pm EST, MTV.com's Remote Control Blog. Be there. [I'll have the direct link as soon as they send it over my way!] We'll be chatting through the episode and through the reunion show! We'll also be sticking around for the West Coast airing! Get excited!

As for who's joining us: I don't want to say until I get 100% definites, so stay tuned. I'll update this as they confirm with me!

In the meantime, get ready for the final episode by reviewing some of my eTV's Finding the Real World DC Cast videos with all the behind the scenes ish they never showed, or watch this week's featured video where Emily held an event for Africa Action!

There will be a lot for us to share tomorrow night that was never shown, and they're no longer spoilers! As always, it's the Real World DC, As We Saw It.

Talk to you tomorrow! It's going to be so bittersweet!

PS: Any requests, poll suggestions, etc- Leave 'em below!
Posted by elizabethany at 10:24 AM